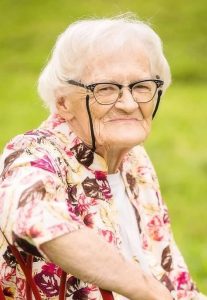 Betty Maxine Comstock, 95, of Havana, formerly of Burnside, passed away at 1:24 a.m. Wednesday morning, September 5, 2018, at The Elms in Macomb. Betty was born October 2, 1922, on the family farm near Burnside the daughter of Edward and Laura (Duffy) Weatherington. She was united in marriage to L.C. Comstock on August 16, 1950, at the Blandinsville Christian Church. Betty is survived by two sons, Randall (Lora) Comstock of Alta Loma, California and Ronald (Beckie) Comstock of Havana; one daughter, Suzanne (John Maguire) Comstock Boussaard of Macomb; two step-daughters she raised as her own, Vicky Geissler of Menifee, CA and Pam (Bud) Rhodes of LaGrande, OR. Her pride and joy were her grandchildren, Robin, Rick, Brian, Mark, Chad, Sarah, John, Lucretia and Mariska; thirteen great grandchildren, Ronnie, Megan, Nichole, Alexandra, Katie, Olivia, James, Olivia, Riley, Cole, Brevyn, Maddie and Brigham; six great great grandchildren, Khloe, Molly, Korbyn, Madelyn, Miranda and one due in November; and several nieces, nephews and cousins. She was preceded in death by her parents; husband, L.C.; two brothers; one sister-in-law; one grandson, John Comstock; one nephew, Derek Weatherington ; two sons-in-law, Ron Geissler and Edward Boussaard. She enjoyed upholstering, sewing, crafts and helping others in various ways. In 1998 she moved to Havana to be near her family. In Havana she was very active with her church, the food pantry, walked three miles a day and assisted friends with activities. Funeral services will be held at 10 a.m. Monday, September 10, at the Burnside Christian Church with burial to follow in Moss Ridge Cemetery in Carthage. Visitation will be held from 4 – 6 p .m. Sunday afternoon at Printy Funeral Home in Carthage. Memorials may be directed to the Burnside Christian Church or the Havana Food Pantry at the Central Christian Church in Havana. A memorial service will be held in Havana at a later date. Printy Funeral Home of Carthage is in charge of arrangements.