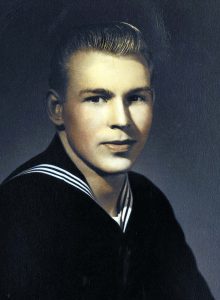 Donald “Bud” VanMiddlesworth, 90, of Canton, passed away at 4:00 p.m., Wednesday, December 21 at Red Oak Estates in Canton. He was born on January 2, 1932 in Breeds to Raymond and Ethel (Kleindinst) VanMiddlesworth. He married Sharon Ball on February 16, 1957 in Canton. She preceded him in death on July 27, 2018. He was also preceded in death by his parents, four brothers, Ronald “Sam”, Charles, Gerald “Fuzzy” and Wayne “Henry” VanMiddlesworth. Surviving are two sons, Tom (Monica) VanMiddlesworth and Tim (Christine David) VanMiddlesworth both of Canton, three grandchildren; Bryan (Amanda) Wolford, Craig (Semone) VanMiddlesworth, Megan (Travis) Rosich, six great-grandchildren; Ethan Rosich, Tannor Rosich, Koltin Rosich, Layla Jones, Alicyn VanMiddlesworth, Vince VanMiddlesworth, two brothers, Larry (Susie) VanMiddlesworth, Robert (Thalia) VanMiddlesworth, one sister, Connie (Francis) Williamson and several nieces, nephews and cousins. Bud served in the U.S. Navy during the Korean Conflict. He retired from International Harvester/Navistar in 1989. He was a volunteer for the Banner Fire Department and served as an Orion Township Trustee. Most of all he loved his family and enjoyed telling stories of growing up in Breeds. He had a passion for farming and taking care of his cows and pets. During his wife’s battle with Alzheimer’s disease, he was her primary caregiver. Services will be 2 p.m. Wednesday, December 28 at Oaks-Hines Funeral Home in Canton with a visitation one hour prior at the funeral home. Burial with military honors will be held at the White Chapel Memory Gardens in Canton. In lieu of flowers donations can be made to Shriner’s Hospital. To leave online condolences, please visit www.oakshinesfuneralhome.com