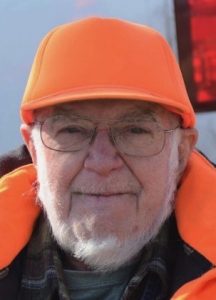 Dale Lee Lascelles, 82, of Ipava “went hunting” on Friday, December 2 at his home on the farm. He was born on February 19, 1940 in Peoria to Charles and Ruby (Schmidt) Lascelles. Dale was a 1958 graduate of Easton High School. He married Addie Slater on June 12, 1962 in Havana. She survives. Also surviving are their four children: Jeanette (and Ernest Chabot) Coyle, of Tennessee, Cindy (and Mike) Chaffin, James (and Kelly) Lascelles and Charles (and Anne) Lascelles all of Ipava, Nine grandchildren; Jeremy McBride, Joseph McBride, Katie (and Kaleb) Volker, Shawn Chaffin, Collin (and Megan Vogt) Lascelles, Dillon (and Ashley) Lascelles, Jessie (and Austin) Rhodes, Sydney (and DJ Thomas) Lascelles and Zach (and Mackenzie Helfrich) Lascelles, and 15 great-grandchildren, four brothers; Kenneth (and Peggy) Lascelles of Ipava, Richard (and Maureen) Lascelles of Litchfield, New Hampshire, Ray Lascelles of Colorado and Steve (Donna) Lascelles of Dewey, Arizona, and 1 sister, Amy (and Tim) Fanter of Havana. Dale is preceded in death by his parents Charles and Ruby Lascelles, step-mom, Dorothy Lascelles, and grandparents, Louis and Addie Schmidt and Frank and Louise Lascelles. He was a lifelong farmer in Fulton and Mason County. He worked at International Harvester in Canton and served as Pleasant Township Supervisor. Dale was a member of 4H and FFA. He served on the Ipava Ballpark Board and was a member of the Illinois Farm Bureau and served on the VIT School Board. He loved sports. He played baseball and slow pitch softball, football and basketball. He helped coach teams and from the bleachers, helped referee’s ref games. The Chicago Cubs was his favorite team and he was thrilled to watch them win the 2016 World Series! He was a passionate hunter and trap shooter. Dale won numerous shoots and awards for his accuracy shooting. He invested the time to teach his kids, grandkids and great-grandkids to hunt and trap shoot. Services will be held on Saturday, December 10th at 11:00 a.m. at the Berean Christian Church in Ipava. Pastor Doug Gorman will officiate. Visitation will take place one hour prior to the service. Interment will take place in the Ipava Cemetery. In lieu of flowers, please bring a baseball, softball, football or basketball to the service. The balls will be donated to local sports programs. Memorials may be made to 4H Shooting Program fees at Jacobs field. “Dale is still kicking, just not very high.” Shawgo Memorial Home has been entrusted with the arrangements.