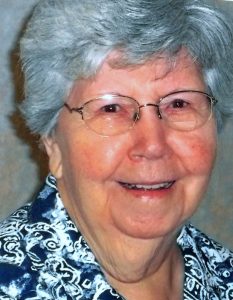 Maurine Corbin, 96, of Quincy passed away at 12:30 a.m. Sunday, October 9 at Blessing Hospital in Quincy . She was born on April 13, 1926 in Wenona the only daughter of the late Albert Clinton & Hannah Williams Fulkerson. She is survived by her daughter, Susan K. Whewell & husband Archie of Versailles, two sons, Randall D. Corbin & wife Emma of Live Oak, FL, Kenneth A. Corbin & wife vJoyce of Rushville, nine grandchildren, several great grandchildren, numerous nieces & nephews She was preceded in death by her son, Larry E. Corbin, a granddaughter, Jennifer Jo Corbin, five brothers, Harold at birth, Raymond Fulkerson, Lester Fulkerson, Harley Fulkerson, Harvey Fulkerson. She graduated from Wenona High School in 1943 and worked at Owen’s IL Glass Co. in Streator during WW II. She married Eugene A. Corbin on January 30, 1946. He preceded her in death on October 27, 2005. They began their farming career near Streator. In 1951 they moved to Brown County where they farmed for many years. In later years she worked at Dennis Chicken in Augusta, Motorola in Quincy, Illinois Glove Co., in Beardstown. She retired from Beardstown Wal-Mart in 2000. On December 13, 2011 she moved to the IL Veteran’s Home (Markwood). Maurine was of deep faith and loved her family. She also enjoyed sewing and made many quilts for her family to enjoy. Funeral services will be held at 11:00 a.m. Thursday, October 13 at Worthington Funeral Home with Pastor Jeremy Hinton officiating. Interment will follow in Ripley Cemetery. Visitation will be held from 10:00 a.m. until the time of services on Thursday. Memorials may be given to Ripley Cemetery. Private condolences & expressions of sympathy may be sent through the Worthington Funeral Home website at www.worthingtonfh.com