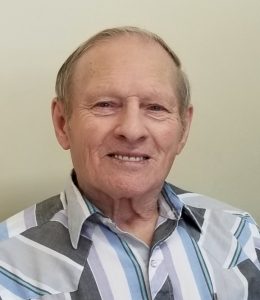 Marcus Freeman “Marc” Cox, 87, of Cuba, went home to be with his Lord and Saviour at 12:04 a.m., Sunday, July 10, at Graham Hospital in Canton. He was born on September 14, 1934, on the family farm just west of Vermont, the son of Arthur and Twila (Ruth) Cox. He leaves his daughters, Cindy (Bob) Wright and Lori (Jim) Eddy; grandchildren, Jennifer (Deickon) Brown, Matt (Becky) Essex, Mike (Erin) Eddy, Amanda (Tyler) Rector, Jessica (Chester) Ruff and Mark (Alyssa) Eddy; great-grandchildren, Hannah, Emma, Michael, Grady, Logan, Matthew, Kaley, Ryan, Claire, Nathanael, Piper, Myles, Kate and Audrey, two sisters, Maxine Leezer, and Cheryl (Gary) Matteson, and one brother, George Cox. Marcus was preceded in death by his parents, brothers Max and Maurie, infant son, Randy, and loving wife, Frances. In his early years, Marcus attended Freeman School in rural Ipava through 8th grade and later graduated from V.I.T. High School, where he greatly enjoyed playing football. From 1954 – 1956, he served in the U.S. Army in Berlin, Germany as a cook and finally as an office clerk. After a whirlwind romance with Frances, which began in February 1957 at a square dance in Cuba, the two later married on August 10, 1957. He worked as a millwright at Caterpillar for more than 30 years until retirement. Following retirement, he worked part-time at Day & Palin in Cuba, baking pizzas inside and grilling outside for special occasions. In his spare time, Marcus enjoyed golfing, fishing, grilling out, and watching sports on TV (especially the St. Louis Cardinals, his favorite team). He and Frances often worked together to provide meals to those who were hurting or sick. More than anything, Marcus loved spending time with his family, which included attending many of the grandkids’ and great-grandkids’ sporting events. He was a member of the Smithfield Church of the Nazarene, where he transported children to Vacation Bible School and assisted with crafts and wherever else needed. A memorial service will be held at 10:30 a.m., Saturday, July 16, at the Smithfield Church of the Nazarene, with Rev. Dean Potts officiating. Visitation will be held at the church from 9:00-10:30 a.m., prior to the service and burial will be in Cuba Cemetery. Memorial contributions may be made to Smithfield Church of the Nazarene for youth church camp scholarships. To send online condolences visit henrylange.com. The family would like to thank Grant Keime nurses and staff; Cuba Senior Center director and drivers; Danielle Wright, caregiver; Cuba Rescue Squad first responders; Fulton County Ambulance Service paramedics; Graham Hospital ER doctors, nurses and staff; ICU doctors, nurses and supervisors, Henry-Lange Memorial Home staff; as well as those who prayed for and visited Marcus during his stay in the ICU.