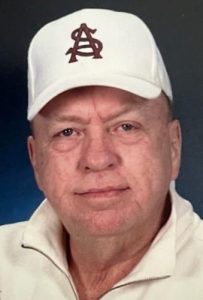 James (Jim) Bonnett, 77, of Fountain Hills, AZ passed away peacefully on April 24, with family by his side. Jim was born in Canton on Nov. 15, 1944, to Gerald and Mary Bonnett. He was the second of four children and graduated from Havana High School in 1963. Jim met his wife, Linda (Warner), at Western Illinois University, where they were both students. He was an active member of Alpha Gamma Rho fraternity. Jim and Linda married on June 28, 1970, and were blessed with two children, Jeremy and Polly. Jim became the owner and general manager of Bonnett Turkey Hatchery after his father’s unexpected death in 1975. After the sale of the family farm, the family moved to Phoenix where he became a sales operator for The Arizona Republic, continuing until his retirement in 2017. He was a devoted family man, generous and giving, and a friend to everyone he met. He was known for his good-natured personality, storytelling and sense of humor. He could be found holding court at any gathering where he was found. Jim was also known for his attention to detail, strong work ethic and appreciation for cars, especially classics. In addition, he followed in his father’s footsteps and received his private pilot license in 1967. He was a member of First Baptist Church of Fountain Hills and, in his younger years, sang in the choir at his home church. He was preceded in death by his sisters, Carol (Susie) and Mary Patricia (Pat). He is survived by his wife, Linda; son Jeremy of Springfield, daughter, Polly of Fountain Hills; and grandchildren, Parker and Eva Bonnett; as well as brother, Jerry and three nieces, Lynn Burgett (Illinois), Janie Holden (Switzerland), and Trisha Sours (Arizona). His faithful companion, miniature schnauzer, Wrigley made his final years even more joyful. His family will miss his immeasurable presence; he was one in a million and dearly loved. A memorial service will be held on June 26, with location details to be determined. Donations can be made to First Baptist Church of Fountain Hills’ youth programs.