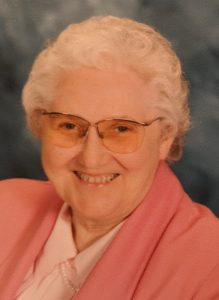 Mary Ruth Wright, a lifelong resident of rural Smithfield, died on May 1at Graham Hospital. She was 93. Daughter of James Everett and Florence (Harris) Ault, she was born on July 18, 1928 on the old family homestead where she would live the rest of her life. Education and public service were important to the Aults, and Mary Ruth graduated from Cuba High School with honors as co-valedictorian and recipient of the DAR award. After graduation, she took a position with the district superintendent and next with the county clerk. When her father retired from his long tenure as township supervisor, she ran for the position and held it for 20 years. She married Clayton Wright, her earliest childhood friend, on August 12, 1951, and they spent 62 years together living and working on the farm. They were the parents of two sons: Robert (Cindy) Wright of Smithfield and the late Kenneth (Rhonda Simpson) Wright. She was preceded in death by her parents, her brother John Curtis Ault, her son Kenneth Wright, her husband Clayton Wright, and her daughter-in-law Pat Wright. Also surviving are five grandchildren: Andrew (Audrie) Wright of Corbett, OR; Stephanie (Matt) Oost of Canton; John Wright of Somerville, MA; Zach (Danielle) Wright of Cuba; and Nicholas (Kayla) Wright of Farmington; and her ten great-grandchildren, in whom she took great joy: Khloe, Eli, Eowyn, Anna, Kendall, Gracelyn, Finnick, Simon, Eldon, and Lily. Mary Ruth was an avid collector of local stories, histories, and genealogies, publishing two books, and leaving behind substantive work on several more. In addition to her formal duties with the township, she was involved in HEA and various historical societies, served as a longtime election judge, and frequently joined the “noodle-making crew” at Smithfield’s Red Brick School after the township purchased the schoolhouse in 1991 to preserve it as a community center, a decision which won the Governor’s Hometown Award at the time. Mary Ruth was the last living charter member of the Smithfield Church of the Nazarene, where she served faithfully for 75 years. She taught Sunday School, was a board member, played the organ, hosted visiting speakers in their home, volunteered with VBS, led in many other capacities within the congregation she loved, and served as church treasurer for 65 years. She loved the Lord and her greatest desire was to be faithful to his calling in her small corner of the world, saying, “I have always tried to do whatever God wanted me to do, and to serve wherever there was a place for me.” A memorial service will be held at 3:00 p.m. Saturday May 7 at the Smithfield Church of the Nazarene with Rev. Dean Potts officiating. Visitation will be held at the church from 1-3 p.m. prior to the service and burial will be in Baughman Cemetery. Memorial contributions may be made to the Smithfield Church of the Nazarene. To view Mary Ruth’s life tribute video or to send condolences visit henrylange.com