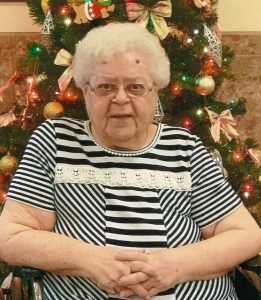 Loretta Skrzypczynksi, 93, of Havana, formerly of Chicago, passed away on Thursday, April 7 at Havana Healthcare Center. She was born on February 5, 1929 in Chicago to Thomas and Stephanie (Budzik) Gruszka. She married John Skrzypczynski in Chicago. He preceded her in death. Loretta is survived by her daughter, Karen, daughter-in-law, Barbara Behoff, three grandchildren, and two great-grandchildren. She was preceded in death by her parents, husband, daughter, Linda, and son, David. A private family prayer will take place at Hurley Funeral Home in Havana, followed by a private graveside service, which will be held at the Mary Mother of God Mausoleum in St. Adalbert Cemetery in Niles, Illinois. Memorial donations may be made in Loretta’s name to St. Jude Children’s Hospital. Online condolences can be left for her family at www.hurleyfh.com. Hurley Funeral Home in Havana is in charge of arrangements.