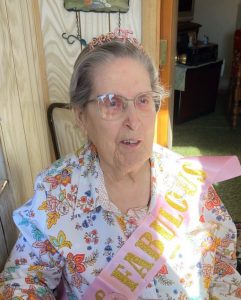 Doris Kirchner Kolves, 96, of Bath passed away on Tuesday, April 5th at 4:55 p.m. at Jacksonville Memorial Hospital in Jacksonville. She was born on November 9, 1925 in Hoopeston to Bert and Myrtle (Blodgett) Potts. She married Wilbur Kirchner in the Pleasant Hill Methodist Parsonage on December 19, 1958. He preceded her in death on July 7, 1976. She married Raymond Kolves in the Bath United Methodist Church on August 24, 1985. He preceded her in death on June 15, 1994. Mrs. Kolves is survived by one son: Donald Kirchner of Rockford. Four step-sons: Raymond Kolves of Mackinaw, Kenneth Kolves of Florida, Marvin and Michael Kolves of Havana. One step-daughter: Diana of Wisconsin. One niece: Rhonda (Ron) Smith of Stonington. Three nephews: Mike (Julie) Potts of Petersburg, Eric (Debbie) Potts of Chandlerville, and Bruce (Penny) Potts of Patterson Bay. Many great and great-great nieces and nephews. 18 step-grandchildren and numerous step-great grandchildren. She was preceded in death by both husbands, both parents, brother Robert Potts, step-father Gerald Lynch, step-brother Jack Lynch, step-daughters Marcia Hernandez and Debra West, great niece McKenzie Force, and great nephew Nathan Potts. She was Salutatorian of the 1946 class at Bath-Lynchburg Community High School. She was an active member of the Bath United Methodist Church until it closed in June of 2018, where she was the financial secretary for 55 years and was church pianist. After the Bath church closed, she became a member of the First United Methodist Church in Havana. She was Village of Bath treasurer for 21 years and assistant secretary and treasurer for Bath-Lynchburg Classmates for 22 years. She enjoyed cross stitch embroidery and quilting crib quilts. She made quilts for all of her step-great grandchildren and great-great nieces and nephews. Visitation was at Hurley Funeral Home in Havana on Sunday, April 10th from 2:00-4:00 p.m.. Funeral was at Hurley Funeral Home in Havana on Monday, April 11th at 10:30 a.m. with the Reverend Carol Stufflebeam of the First United Methodist Church officiating. Burial was in Bath Cemetery. a luncheon for family and friends was held at the First United Methodist Church in Havana following the gravesite services. Memorial may be made to the First United Methodist Church or the Village of Bath Building Fund. Hurley Funeral Home in Havana is in charge of arrangements.