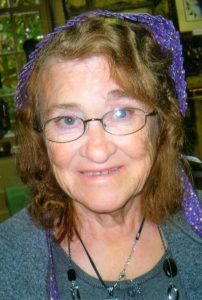 Sharon Kay Malott, 80, of rural Lewistown, was called home to our Lord on Monday, April 4, surrounded by her loving family at Graham Hospital, in Canton. She was born April 26, 1941 to Loren and Nellie “Elizabeth” (Brown) Lindsey in Lewistown. They preceded her in death along with an infant brother, one infant daughter, and one infant son. Sharon married Clyde A. Malott in Lewistown in 1957. Together they raised seven loving children. Sharon is survived by her children, Bob (Peggy) of Canton, Terry (Karla) of Lewistown, Mike and Brian of Havana, David (Tiffany) of Astoria, Brad (Heather) of Canton, Karen (Kenneth) Seward of Havana. She is also survived by her sister Carolyn Richardson of Missouri, her brother Charles Lindsey of Texas, nineteen grandchildren, and twenty great grandchildren. Sharon was a homemaker. She was a member of Grace Baptist Church in Havana. She enjoyed spending time with her family and grandchildren. Sharon also enjoyed decorating beautiful wedding cakes and she did so for many years. She loved family pictures. Cremation will be accorded. A celebration of life will be held at a later date. Henry-Lange Memorial Home in Lewistown is in charge of the arrangements. Memorial contributions may be made to Grace Baptist Church in Havana. To view Sharon’s life tribute video or to send online condolences visit henrylange.com.