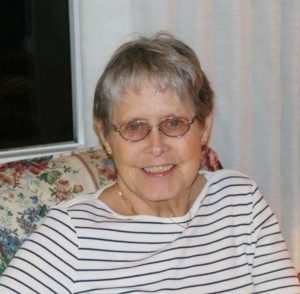 Judy Carol Wickert, 80, of Canton, passed away at 2:13 a.m. Wednesday February 16 at OSF St. Francis Medical Center in Peoria, with her family by her side. Judy was born May 19, 1941 at Canton, the daughter of Raymond and Bernadine (Cooper) Heffren. She first married James Harris, and they had two sons, Jefferey (Lita) Harris of Matanza Beach, and James “Scott” (Mo) Harris of Galva. She later married James Wickert on April 1, 1985 in Lewistown, becoming a bonus mom to Becky (Montie) Wilcoxen of Canton, and Shellie (Perri) Green of Canton. Judy was a grandma to thirteen grandchildren, Jeramie, Christopher, Alyssa, Alex, Mandy, Derek, Carrie, Billy, Derek, Joshua, Darren, Jaimie, and Heather, twenty four great grandchildren, and one sister, Kathy Lynn (Steve) Haffner, and many nieces, nephews, and cousins. She was preceded in death by her parents, one brother, Robert Heffren, and one sister inlaw, Rose Heffren. Judy grew up in Summum and attended Lewistown schools, graduating in 1959. She earned her LPN nursing degree from Spoon River College in 1983 at the age of 42 and was very proud of her accomplishment. She worked for 20 years as a nurse at Sunset Manor in Canton. She was a member of the First Christian Church of Canton. She enjoyed genealogy and was Corresponding Secretary for the Fulton County Historical and Genealogical Society. She loved book indexing, going on the Spoon River Drive and flea markets. Jim and Judy loved going to listen to music and dancing together when they were able. Judy was matriarch of the Heffren family and enjoyed planning the yearly reunions and visiting with family and friends. Her funeral service was held at 11:00 a.m. Monday February 21 at the First Christian Church of Canton where visitation was held one hour prior to services. Burial was in Apple Cemetery at rural Lewistown. In lieu of flowers memorial contributions may be made to the First Christian Church of Canton. Condolences may be made at henrylange.com