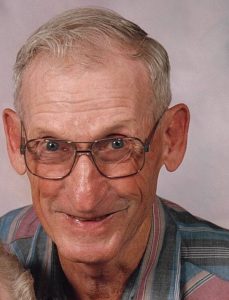 Dorwin “Salty” W. Hedden, 93, of (Blyton) Smithfield, passed away early Thursday, February 3 at Farmington Country Manor. Salty was born on August 26, 1928, at his family home in Fairview Township. He was the son of Benjamin E. and Dottie (Catlett) Hedden. He married Elva “Berniece” Loveland in Lewistown on July 22, 1949. She preceded him in death on December 21, 2017. He is survived by his sons, Ronny E. (Debby) of Mackinaw and Richard A. of Cuba; one daughter, Kathy S. (Eric) St. Clair of Wee-Ma-Tuk; daughter-in-law, Pam Hedden of Ellisville; six grandchildren, Chris Mahr, Kari Simmons, Dax Hedden, Ian Newburn, Kourtney St. Clair, Kassidy Klinedinst; seven great-grandchildren, and one brother, Carroll (Donna) Hedden. He was preceded in death by one son, Jerald W; his parents; three brothers, Robert, Dwayne, and Burnett. Salty served in the United States Army and retired from Caterpillar after over 36 years. He enjoyed farming, raising livestock, and hunting. He was an avid Bears and Cardinals fan. More than anything, he loved his family and being a dad/grandpa. Service will be held at 11 a.m. on Wednesday, February 9 at Sedgwick Funeral Homes & Crematory in Canton. A visitation will be held the same day from 10 a.m.- 11 a.m.. A burial will follow service at Wiley Cemetery in Ellisville. Rev. Ellen Dodd will officiate. Memorials may be made to the Fulton County Humane Society. To leave an online condolence you may go to www.sedgwickfuneralhomes.com