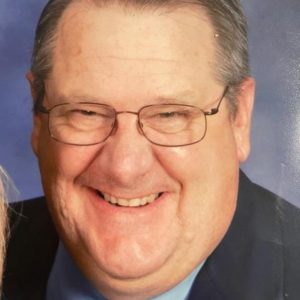 Peter Wade Cooper, 64, of Manito, passed away at Blessing Hospital in Quincy at 11:15 a.m., on Friday, October 8. He was born February 16, 1957, in Harve de Grace, Maryland, to Delbert and Darlene (Lily) Cooper. He married Kathy Lawson on September 3, 1976, at Spring Lake Missionary Church, near Manito. She survives. Mr. Cooper is survived by his wife, Kathy, of Manito; two children: Jeff Cooper, of Galesburg, and Tiffany (John) Burke, of Alabama; daughter-in-law, April Cooper, of Manito; and one granddaughter: LexiAnn Cooper, of Manito; as well as one sister: Becky Jackson. He has many nieces and nephews. He was preceded in death by his parents. Mr. Cooper was a member of Spring Lake Missionary Church, near Manito. He earned a B.A. in Occupational Health from University of Louisville, and an M.S. degree in Engineering Technology from Murray State University, Murray, KY. He retired from the US Army, serving as a tank commander. Following retirement, he was employed by the US Army Corps of Engineers. During this time, he served three deployments: two in Afghanistan and one in Iraq. He served as project manager for building schools, a hospital, and municipal buildings. He was a former member of the Quad Cities Rotary Club. Pete, as he was known to friends and family, demonstrated his passion for providing a wonderful life for his family. His tenacity, fierce work ethic, and his love for his role of father to his children and papa to LexiAnn, will be sorely missed. He had a beautiful baritone singing voice and loved to sing, often sharing his love for singing about the Lord. He met his high school sweetheart, Kathy, at a music contest and they married 45 years ago. Known as a loyal friend and dedicated worker, he served on mission trips to eastern Kentucky, worked with Baptist’s Men Fellowship, and enjoyed woodworking projects. Visitation will be held at Maas-Hurley Funeral Home, in Manito, from 5:00 until 7:00 p.m., on Friday, October 15. Funeral services will be held at Spring Lake Missionary Church on Saturday, October 16 at 10:00 a.m. Rev. Jamie Miller will officiate. Burial will follow the services at Meadowlawn Cemetery, in Manito. Military rites will be provided by Hill-Palmer American Legion Post #561 in Manito at the graveside. Memorial contributions may be made to St. Jude’s Children’s Research Hospital or Wounded Warrior Project. Online memorial messages may be left for the family at www.hurleyfh.com. Maas-Hurley Funeral Home in Manito is in charge of arrangements.