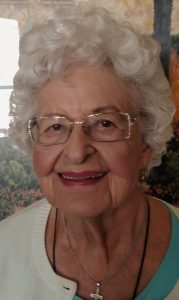 On October 3 in Phoenix, AZ, Mary Collins Briney, formerly of Lewistown and Browning, passed from this earth. She was born August 10, 1929 in Dunfermline the 2nd to the youngest of 10 children, to Gabriel “Guy” and Johanna Zaborac Grzanich. She was predeceased by all. She attended Lewistown Community High School and graduated in 1947. On June 21, 1949, she was married to Bob Collins who passed away October 12, 1985. On August 11, 1989, she married Roger Briney of Browning, who died November 4, 2006. Mary is survived by her children: Karen (John) Anderson of Hilliard, FL and Andy (Donna) Collins of Phoenix AZ and step-daughter-in-law Johnna Briney of Moberly, MO (whose husband H. Robert “Bobby” Briney is deceased); 4 grandchildren: Suzanne (Robert) Burkhead of Jacksonville, FL and Bryan (Kristen) Boles of Lakeland, TN; Ashley Collins Hill of Phoenix, AZ and Amanda (Joey) Monty of Dallas, TX and 7 great-grandchildren: Drew and Summer Bower of Jacksonville, FL and Raine, Taten, Maui, Stormi and Teal Boles of Lakeland, TN, as well as numerous nieces and nephews. Mary spent her entire career in banking, retiring from the Farmers State Bank in 1989. She loved hummingbirds and enjoyed dining out, traveling and spending time with family and friends. And, if her claims of winnings can believed, she enjoyed uncanny luck at the slot machines. She was a devout Catholic. The family will receive friends and family from 5:00 – 7:00 p.m. on Friday, October 15 at Henry- Lange Memorial Home, 203 North Illinois Street, Lewistown, IL 61542. A rosary service will follow. A funeral Mass will be held Saturday, October 16 at St. Mary’s Catholic Church in Lewistown at 11:00 a.m. followed by interment in Oak Hill Cemetery. In lieu of flowers, please make memorial contributions to The Michael J. Fox Foundation for Parkinson’s Research or St. Mary’s Catholic Church or other charity of your choice.