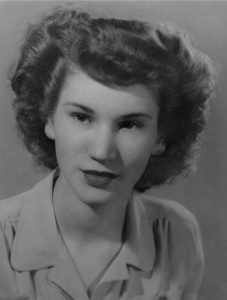 Mrs.Lorena Morgan Miller, age 96, died on September 11 in Columbia, Missouri. Lorena was born August 30, 1925 in Cuba, the daughter of Loren L. and Della McGhee Morgan. She was married on July 24, 1952 in Carthage to Kenneth V. Miller. She graduated from Cuba High School, in 1943. From 1943 to 1951 she was the bookkeeper and assistant cashier at the State Bank of Cuba. From 1951 to 1961 she was the secretary to the superintendent of Fulton County Unit School District #3. She moved with her family to Jefferson City, Missouri and after raising her son, she worked from 1977 until her retirement in 1990 for the Office of the Inspector General of the U.S. Department of Health and Human Services in Jefferson City, Missouri. She enjoyed square dancing, reading ancient and U.S. history, baking, and watching movies and listening to music with her grandson, but most importantly, just spending time with her family. After the birth of her grandson, she moved to Columbia to be close to her son and grandson. Survivors include: her son, Kevin Miller and his wife Shelly of Columbia, Missouri; and her grandson, Max Miller, also of Columbia. She was preceded in death by her husband, parents, and sister, Arlene Compton. A graveside service will be held at noon Thursday, September 16th at the Cuba Cemetery. Burial will follow at Cuba Cemetery. There will be no visitation. Henry-Lange Memorial Home in Cuba is assisting the family with arrangements. Online condolences may be made at henrylange.com.