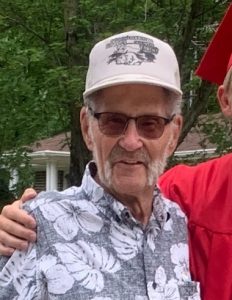 George S. Harn, 91, of “Harnsville” Lewistown, passed away at 9:25 p.m. Friday July 9 at Clayberg Nursing Home in Cuba. He was born August 23, 1929 at Cuba, the son of Isaac and Opal (Willcoxen) Harn. He married Thelma Wilcoxen on November 18, 1950 at Lewistown. He is survived by his wife, three sons, Daryl harn of Tarpon Springs, FL; Scott Harn of Tarpon Springs, FL; Kevin Harn of Lewistown, two daughters, Kathy Kruzan of Lewistown, and Brenda (Jim) Nicholson of Lewistown, seven grandchildren, Angela (Andrew) Gamsby of Clearwater, FL; Stephanie Myers of Galesburg, Sonya (Nick) Smith of Lewistown, Brooke McBride of Canton, Whitney (Joseph) Dudek of Nashville, IL; Christopher Harn of Canton, and Isaac (Kelsey) Harn of Campton, KY; several great grandchildren, and several step grandchildren, one brother, Lewis Harn of Lewistown, and one sister, Jane Boyd of Lewistown. He was preceded in death by his parents, one daughter, Georgia Griffin, six sisters, and one brother. George retired from the CB&Q Railroad. He later worked at Pratt Lumber for many years, and also was a school crossing guard for 26 years at Lewistown Central School. He served in the Army during the Korean War, and was a lifetime member of Lewistown VFW Post 5001. Graveside services will be held at 10:30 a.m. Saturday July 17 at Oak Hill Cemetery with Darla Henderson officiating. Military rites will be accorded by Lewistown VFW Post 5001 and American Legion Bishop Post 1. There will be no visitation. Memorial contributions may be made to Lewistown VFW Post 5001. Condolences may be made at henrylange.com