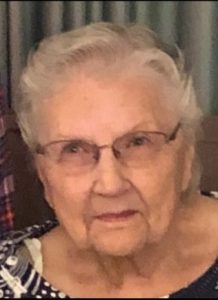 Carol Ann Nissen, 93, of Manito, passed away at her home, at 5:20 a.m., on Wednesday, June 2. She was born September 15, 1927, in Forest City Township, to Charles Ray and Lillian (Gowan) DeVore. She married Ernest A. Nissen, in Havana, on April 26, 1947. He preceded her in death on November 9, 1999. Mrs. Nissen is survived by two children: Gary (Gloria) Nissen, of Mason City, and Diane (Dennis) Reynolds, of Manito; three grandchildren: Brock (Megan) Nissen, of Mason City, Jason Reynolds, of Peoria, and Cari Caughey, of Tremont; as well as five great-grandchildren: Jonah and Kaleb Caughey, and Jax, Tripp and Sloan Nissen. She was preceded in death by her parents, husband, six brothers: Donald, Harold, Earl, Nelson, Jim, and Gene DeVore; and two sisters: Norma Croce and Nancy DeVore; as well as one grandson: Bret Nissen. Mrs. Nissen was a homemaker, who assisted her husband on the farm. She enjoyed baking pies and donuts for the local businesses in the Manito area. She had also worked for Murphy’s Mart at the Pekin Mall, and was a member of Royal Neighbors. Private graveside services will be held at Pleasant Hill Cemetery, near Forest City, at a later date. Memorial contributions may be made to Forman Ambulance. Online memorial messages may be left for the family at www.hurleyfh.com. Maas-Hurley Funeral Home, in Manito, is in charge of arrangements.