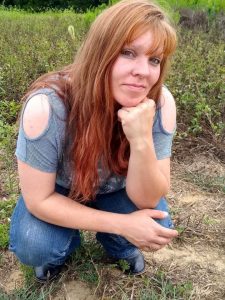 Holly Ann Terrell, 37, of Topeka passed away at her home on Monday, May 3 at 9:15 a.m. She was born on September 14, 1983 in Jacksonville to John Tamulis and Cynthia Stanley. Holly is survived by her children: Dallas Michael Gaylen Thompson, Dalton Jeffrey Lee Thompson, Heavenly Autam Jane Thompson, and Devin Trentence James Thompson, her father, John Tamulis, her mother and step-father, Cynthia (David) Glover, sister, Kimberly Brent, brother, Jake Terrell, half-brother, Timmy Rooker, and numerous cousins, nieces, nephews, aunts, and uncles. She was preceded in death by her sister, Lacey Terrell, her grandparents, John and Barbara Tamulis, her cousin, Larry Hughes, and one niece. Cremation rites have been accorded and no services are scheduled at this time. Memorial donations may be made in Holly’s name to a trust for her children at Havana National Bank. Online condolences can be left for her family at www.hurleyfh.com. Hurley Funeral Home in Havana is in charge of arrangements.