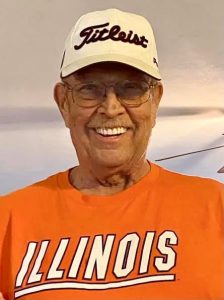 Stanley Gregg Francis “Skipper”, 63, of Mason City passed away Thursday, May 6 at Memorial Medical Center in Springfield surrounded by his wife and kids. He was born on August 24, 1957 in Lincoln to Kenneth and Marilyn (Sanders) Francis. He married Rhonda Young on August 15, 1981. Skipper is survived by his wife, Rhonda; three children, Gina Francis, April (Scott) Cremeens, Scott (Rebecca) Francis; seven grandchildren, Mireya, Christopher, Khloe, Macy, Andrew, Simon, Maggie; and siblings, Gary (Tricia) Francis of Mason City and Linda Crane of Lincoln. He was preceded in death by his father, his brother Andy Francis, and many dear friends. Skipper was proud of the life he built. He had many jobs over the years beginning with his Grandpa’s Texaco station then including Caterpillar, Grosch, various construction crews, bar owner, and ultimately retiring from National By-Products. He was also a retired firefighter from the Mason City Fire Department. He loved talking to people up at Skipper’s for so many years. He loved his vintage sports cars and was an avid golfer and gambler. He enjoyed all sports, but especially Cardinals baseball and Illini basketball. Skipper definitely didn’t know a stranger and was loved by so many people. A graveside service will be held on Friday, May 14 at Mason City Cemetery at 10:00 a.m. with a celebration of life after the service at the Hideout in Mason City. Memorial contributions may be made to the family, which will then be donated in honor of Stanley to the American Cancer Society at the Drive Out Cancer event in July. Online condolences may be left for the family at www.hurleyfh.com Hurley Funeral Home in Mason City is assisting the family with arrangements.