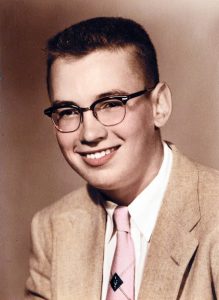 Robert L. Strode, 82, passed away on Friday, March 5, 2021 at the Graham Hospital Emergency Room in Canton. He was born on September 9, 1938 in Joshua Township to Alva “Ghlee” and Maida (Newburn) Strode. They preceded him in death. He married Kathryn Faye Harr on March 14, 1959 in Noeponset. She preceded him in death on March 15, 2011. Surviving are two children, Shelly Strode of Fairview, Troy (Melanie) Strode of Knoxville, one sister, Patsy Lowry of Smithfield and two grandchildren, Kaleigh (Jimmie) Bowen and Dakota Strode. Also preceding him in death is one daughter Sherry and one infant sister, Irene Strode. Robert graduated from Cuba High School in 1956. He worked for International Harvester in Canton and later retired from Navistar. He was a lifelong farmer. He also worked at Cuba Elevator and Webb Fertilizer. He was a member of the Poland China Association, Duroc Association, the Bald Bluff Antique Tractor Pulling Club and collected International Tractors. He was known throughout the county for his love of the “Red Tractor”. Tractor pulling and parading his tractors gave him great joy. A private funeral service will be held due to COVID restrictions and a burial will be held at Wiley Cemetery. Oaks-Hines Funeral Home and Crematory has been entrusted with arrangements. Memorials may be made to American Heart Association or to the American Cancer Society. To leave online condolences, please visit www.oakshinesfuneralhome.com