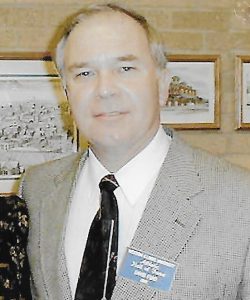 David H. Ford, 77, of Cuba, passed away at 11:41 PM Thursday January 28, 2021 at OSF St. Francis Medical Center. He was born November 3, 1943 at Smithfield, the son of Burley L. and Hazel B. (Baughman) Ford. He married Ardith Cluts on September 18, 1965 at Cuba. She survives with one son, Barry (Lisa Brilliant) Ford of Middletown, CT; one brother, Larry (Brenda) Ford of Canton, and one sister, Marilyn (Kenny) Brooks of Smithfield. He was preceded in death by his parents. Dave was a teacher and coach at Cuba High School, and later served as principal at the school. He then went on and served as superintendent of Cuba Schools, and later retired as superintendent of Spoon River Valley School District. He later served as a truancy officer for the Fulton County Regional Education Office. He was a graduate of Western Illinois University, and was a member of WIU Alumni Association, and the Leatherneck Club. In 1991 he was inducted into the WIU Athletic Hall of Fame. He also had an honorable mention for the All American Baseball Association. A private graveside service and burial will be held at Cuba Cemetery with Reverend Larry Wright officiating. A celebration of life will be held for the public at a later date. Memorial contributions may be made to the Cuba Food Pantry, Cass-Putman Rescue Squad, or any charity of the donor’s choice. Condolences may be made at henrylange.com