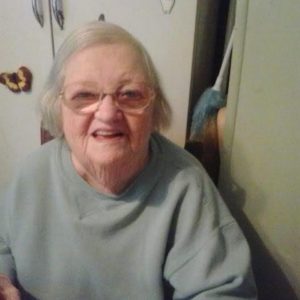 Betty Jean Smith, 88, of Easton, passed away peacefully at her home at 3:26 p.m., on Monday, December 21. Betty was born March 30, 1932, in a farmhouse near New Berlin, to Clifford and Mary (Mohn) Buchanan. She married Lyman Leroy Smith Sr. on October 27, 1958, in a double ring ceremony. He preceded her in death on May 10, 1993. Mrs. Smith is survived by two sons: Richard and Leroy Smith, both of Easton. Betty is also survived by sister, Shirley Parker of Kilbourne and brother, Bill (Phyllis) Buchanan, of Tallula. She was preceded in death by her parents; mother-in-law, Ethel Smith; father-in-law, Emery Smith and brother-in-law, Robert Parker. Betty attended different schools in her youth. She fell in love with the Rock Creek area and enjoyed visiting there numerous times. She was a homemaker and worked several years on the Smith’s Christmas Tree Farm, making grave blankets. She was also a long time member of Atterberry Baptist Church. Graveside services will be held at Laurel Hill Cemetery in Havana, on Saturday, December 26, at 11:00 a.m. Rev. Abraham Mogerman will officate. Memorial contributions may be made to the Alzheimer’s Association or American Cancer Society. Online memorial messages may be left for the family at www.hurleyfh.com. Hurley Funeral Home in Havana is in charge of arrangements.