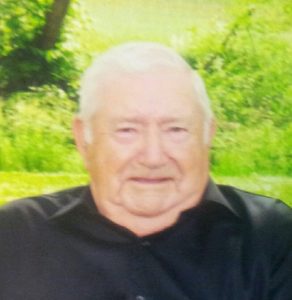 Charles F. “Fritz” Wust, 89, of Smithfield, passed away at 1:50 a.m. Thursday November 26, 2020 at Graham Hospital Emergency Room. He was born March 8, 1931 at Nevada, MO; the son of Charles E. and Edith E. (Irwin) Wust. He married Joan Lafary on January 5, 1957 at Lewistown. She survives. Also surviving are three daughters, Linda (Jim) Bainter of Peoria, Leigh (Don) Hines of Cuba, and Lori (Doug) Menke of Roseville, four grandsons, Justin (Angie) Bainter, Jarrod Bainter, Darren Hines, and Gunnar Menke, two great grandchildren, Jensen Bainter, and Ayla Bainter, one brother, Robert (Diana) Wust of Kewanee, one sister, Ruby (Neil) Schisler of Knoxville, and several nieces and nephews. He was preceded in death by his parents, and three sisters. Fritz retired in 1998 from Navistar. He was a Korean War veteran serving from 1949-1952 in the Army. He was a 67 year member of the Ipava American Legion, and was a member of the Fulton County Civil Defense, and the White Park Cattle Association. He had served as a volunteer fireman for the Smithfield Fire Department. He was an avid wood worker, and also enjoyed fishing, hunting, and farming. A graveside service was held at 2:00 p.m. Monday November 30 at Oak Hill Cemetery in Lewistown with Reverend Kevin Kessler officiating. Military rites were conducted by his Ipava American Legion Post. There was no visitation. Anyone attending the graveside service will be required to maintain social distancing and to wear a mask. Memorial contributions may be made to the Cass-Putman Rescue Squad, Smithfield Fire Department, or the Ipava American Legion Post. To view Fritz’s life tribute video or to send condolences visit henrylange.com