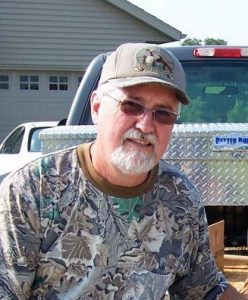 Thomas G. Orwig, 69, of Canton, passed away Sunday, October 11, at his home in Canton. He was born on March 17, 1951, to Sheldon and Margaret Ann (Williams) Orwig. They preceded him in death along with one infant sister, Peggy Orwig. He is survived by his wife, Maria (Holthaus), whom he married on March 18, 1972 at St. Mary’s Catholic Church in Canton. Also surviving are two children, Nick (Angela) Orwig and Brette Orwig, one sister Debbie (the late Bob) Emery, and two grandchildren, Emma Orwig and Easton Orwig. Tom owned and operated Orwig’s Autobody in Canton, his family business where he worked with his mother, father and daughter. Tom was a member of the Canton Elk’s Lodge. He loved the outdoors hunting, fishing and camping. He enjoyed taking care of his outdoor space at his home and farming with his dad, his son and grandson. Most of all he loved spending time with his grandchildren and attending all their activities. Memorials may be made to the Tom Orwig Memorial Scholarship Fund C/O Mid America National Bank, for High School Students who participated on the Bass Fishing Team or the Trap Shooting Team and wish to further their education after high school. Per Tom’s wishes cremation rites will be accorded and there will be no services. To leave online condolences please visit www.oakshinesfuneralhome.com.