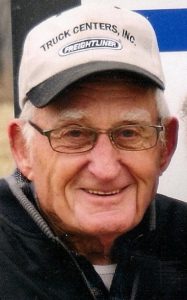 Charles E. “Gene” Haggerty, 87, of rural Smithfield passed away at 7:59 p.m. Wednesday July 8 at his residence. He was born February 21, 1933 at Cuba the son of Charles J. and Mary Rita (Ford) Haggerty. He married Iona Wells on April 2, 1965 at Checkrow. She survives along with four daughters, Tina Payne-Reed of Smithfield, Carol Haggerty of Smithfield, Stacy Haggerty of Smithfield and Sheryl (Ralph) Kindhart of Plymouth, two brothers, Gary (Brenda) Haggerty of Texas and Scott (Pam) Haggerty of Ellisville, two sisters, Marie Ann Corsaw of Florida and Sharon Hinkley of Florida, seven grandchildren and nine great grandchildren. He was preceded in death by his parents, one son, Andrew L. Payne Jr., one grandson, one granddaughter, four brothers and two sisters. Gene graduated from Cuba High School class of 1951. He was a US Army veteran serving during the Korean conflict. Gene was a farmer and was the owner of Go-Go Trucking where he was an independent truck driver. Throughout the years he drove over two million miles. Gene enjoyed auctions and attending football games with his children. A graveside service will be held at 1:30 p.m. Tuesday at Wiley Cemetery with Pastor Kevin Lingenfelter officiating. Burial will follow at Wiley Cemetery rural Ellisville with military services by the Cuba American Legion Russell Smith Post 533. Visitation will be held from 11 a.m. until 1 p.m. Tuesday at the Henry-Lange Memorial Home in Cuba. Memorial contributions may be made to the family. To view Gene’s life tribute video or to send online condolences visit henrylange.com.