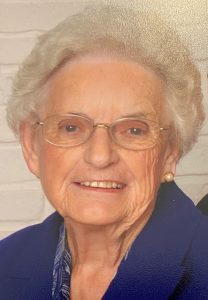 Barbara J. Lyons, 90, of Green Valley passed away at 2:10 a.m.. Wednesday, June 10 at Pekin Manor Nursing Home in Pekin. She was born August 12, 1929 in Bloomington the daughter of August and Marie Ihrcke Klink. She married Robert Lyons on November 20, 1966 in Bloomington and he survives. Also surviving are one son Jonathan Lyons of Delavan; one daughter Jennifer (William) Smart of Bloomington; one granddaughter Kaitlin (Brent) McKerrow of New Palestine, Indiana; one grandson Luke Smart of Bloomington; one great granddaughter Mia McKerrow of New Palestine, Indiana and one sister Betty Lamb of Kewanee. Three brothers and one sister preceded her in death. Barbara went through Trinity Lutheran Grade School and graduated from Bloomington High School in 1947. She worked two years at the St. Joseph School of Nursing and later at State Farm in Bloomington for fifteen years. She then worked for the IRS Distribution Center in Bloomington for eight years. She was a member of St. Paul’s Lutheran Church near Manito and its Tabitha Society. She taught Sunday School and served as Sunday School Secretary for several years. Barbara also served as an Election Judge and Malone Twp. clerk for many years. She enjoyed baking, gardening, canning, bowling, reading and word puzzles. Graveside services will be Saturday, June 13 at Green Valley Cemetery. Pastor James Batchelor will officiate. There will not be any visitation time prior to the service. A memorial service for Barbara will be announced at a later date. Memorial contributions may be made to St. Paul’s Lutheran Church 21819 N. CR 3300 E. Manito, Illinois 61546 or to the Trinity Lutheran School Scholarship Fund 1102 W. Hamilton St. Bloomington, Illinois 61704. To express an online condolence go to www.hurleyobit.com. Maas-Hurley Funeral Home in Manito assisted the family with arrangements