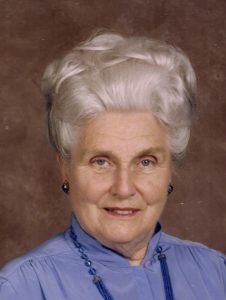 Blanch Bernice (Hoff) Karasek died peacefully in her sleep of natural causes in Cohoes, New York, on April 23rd. She was 95. A longtime former resident of Havana, Blanch was the oldest child of Dorothy (Henderson) and Earl (“Pete”) Hoff, born on February 18, 1925 in Havana. Soon the family moved to a farm in Easton, and Blanch (known as ‘Tootie’ to her family) attended Miss Yardley’s one-room school, and then the Easton Community School. She graduated from Havana High School in 1942, earning awards for her athletic ability. Blanch completed a post-secondary course in Peoria, and worked briefly for the Penn Mutual Insurance Company, but soon joined the war effort at Tinker Field in Oklahoma City. There, working as a very young manager in production of the famed C-47 aircraft, she met a pilot, her future husband, Edward Karasek. Ed and Blanch were married at St. Patrick’s Church in Havana on April 16, 1948. The couple moved to the New York metropolitan area, with Blanch leaving a job she enjoyed, managing the office at the Bonnett Turkey Hatchery, and her husband starting a life-long career at Pan American World Airways. Settling in Huntington, Long Island, Blanch and Ed built a home, raised five children, and enjoyed a close group of friends in boating, hunting, and fishing. The family travelled widely in Europe and Asia, and relocated to Hong Kong during 1966-1968, where Pan American operated a base and provided civilian support for the Vietnam War. Blanch, always open to new experiences, made friends easily with other families living in Hong Kong serving their governments in diplomacy, trade, and intelligence. When her children’s ages permitted, Blanch returned to work as an activities director for the elderly, at an innovative facility in Huntington, the Carillon House. Blanch loved her work, retiring only when other obligations became pressing, and she returned to Havana in 1987. Ed then came to live in Havana upon his retirement in 1990. Blanch and Ed farmed their property on Route 78 in Havana, and enjoyed their new and old friends, until Ed’s death in 2000. Blanch enjoyed her work with the Havana Women’s Club (serving as president), and became a lay server at St. Patrick’s Church in Havana. She traveled when time permitted, and visited the Henderson family environs in Scotland in the summer of 2007, enjoying a short public appearance by the Queen at Braemar. Blanch continued to farm her property, working with local active farmers, until 2010, when she returned to New York State to be closer to her children. Her brother Ernest Wayne Hoff of Havana; her five children, Joellen, India, James, Cynthia, and Carol; and her nephew Michael “Pete” Hoff and his family survive her. She was pre-deceased by her brother, Donald Lee Hoff, her grandson, Jackson Vandeberg, and her nephew, Bart Hoff. Internment will be private; the family suggests memorials made to the Mason County District Hospital.