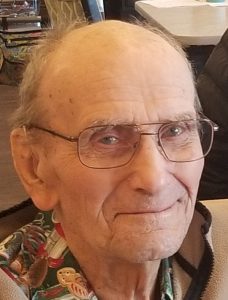 Gene Hermann, age 91, of Havana, died at 5:00 a.m., on Saturday, April 11, at the Villas of Hollybrook in Washington. He was born November 6, 928, in Topeka, to Edward and Freda (Kellersman) Hermann. He married Joan Furrer on June 25, 1950, in Easton. She survives. Also surviving are two sons: Douglas (Lynda) of Libertyville and Dennis (Jill) of Washington; and four grandchildren. He was preceded in death by his parents; sister, Mabel G. Stier and brother, Don J. Hermann. He was a 1950 graduate of Illinois Wesleyan University, with a bachelor’s degree in Business Administration. He owned and operated an Insurance and Real Estate Agency in Havana for 34 years, retiring in 1986. He was a member of St. Paul’s Lutheran Church in Havana, having served as Chairman of Church several times, as well as on their Foundation and was chairman of their new parsonage committee in 1963. He served on formation committees for Mason District Hospital; Havana Little League and Lakewood Golf Association, and later served the latter two for several years as board member. He was treasurer of the Havana Optimist Club’s effort in building the Optimist Pool. Governor Thompson appointed him to Havana Regional Port Authority and while on that board, was instrumental in developing Havana Regional Airport. He joined the Havana Club of Optimist International in 1952 (and still a member) and was chosen as District Governor in 1961; attended several International Conventions and was a Life Member. He served on Havana Community Chest Board for 9 years. He served on Mason County Housing Authority for many years. He also served as board member of the State Bank (now TBK) for 18 years. For 13 years, he was a member of Regional Board of School Trustees for Mason, Menard and Logan Counties. He was an avid sports fan, but his first love was basketball. Winter time would find him in the bleachers attending Jr. High, High School and College level games. Cremation rites have been accorded and burial will be held at Easton Cemetery at a later date. Memorial contributions may be made to St. Paul’s Lutheran Church Foundation in Havana, or Calvary Lutheran Church in Orr, Minnesota. Hurley Funeral Home in Havana is in charge of arrangements.