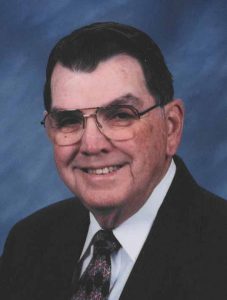 Harold Dean Pschirrer, 91, of Canton, passed away on Sunday, April 5, at Graham Hospital in Canton. He was born on February 8, 1929, in Canton. Harold is preceded in death by his father and mother, Charles and Mary (Piercy) Pschirrer, and his brother Gordon. He is survived by his beloved wife Gloria (Saurbaugh) Pschirrer, two sisters in laws, Betty (Bruce) Scarcliff, and Pamela Pschirrer, and a large extended family grieving the loss of this kind, precious man. Though his driving force in life was his love for his wife (With whom he celebrated their 67th wedding anniversary last week), Harold had a strong, positive impact on his 14 nephews and nieces, and their subsequent children and grandchildren. His calm, non-judgmental demeanor, his ready humor, his ability to listen and problem solve, his ready smile and his patience made him a perfect uncle and lifelong friend. As his health failed, his family rallied to support Gloria and Harold in an effort to show both of them how much they are loved by all. Harold graduated from Canton High School in 1947. After a year at Valparaiso University, Valparaiso, IN, Harold returned to Canton to begin a long, successful career with the Illinois Bell Telephone Company. He retired from AT&T in 1991. Harold had a love of community service in Canton. A member of Wesley United Methodist Church in Canton, Harold was also a member of the Canton Elk’s Lodge #626, of which he was a past Exalted Ruler and, at his death he was the oldest and longest serving member. He was also a lifetime member of the Masonic Lodge, the Consistory and Shriners. Harold learned to fly at an early age in his father’s Piper Cub. He was a member of the Fulton County Flying Club, of the Fulton County Ham Radio Club, Canton Country Club, and an active member of the YMCA. He was a Co-President of the Friendship Festival in 1965. Harold served in the National Air Guard for six years. When he retired from the phone company, he became a volunteer at Graham Hospital. Harold was service oriented and found numerous ways to help people and organizations. His family and friends meant everything to him, and his willingness to help through clubs and organizations, volunteerism, or by simply offering a cold drink and a sympathetic ear to worried, sad or troubled family member or friends made him invaluable to all who had the good fortune to know him. Memorials in the name of Harold Pschirrer can be made to the Wesley United Methodist Church, the Elk’s National Foundation, or the Shriner’s Children’s Hospital. Oaks-Hines Funeral Home and Crematory has been entrusted with services. Due to the COVID – 19 Mandates a private burial service will be held at Greenwood Cemetery. A Facebook Live Stream will be held on Wednesday, April 8, 2020 starting at 2 pm. To leave online condolences please visit oakshinesfuneralhome.com