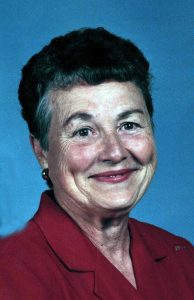 Thelma I. Clark, 89, passed away on Monday, March 9 at Red Oak Estates in Canton. She was born on February 6, 1931 in Canton to Joseph and Annie (Hardy) Shaw. They raised Thelma in St. David. They preceded her in death. She married Robert H. Clark on September 5, 1951 in Canton. He preceded her in death on August 24, 1999. Surviving are her sons, Jerry Clark of Spokane Washington, John (Rhonda) Clark of Canton, Illinois, Jim (Pam) Clark of Cambridge, Illinois, four grandchildren, Sam, Jennifer, Steve and Lauren, one step grandchild, Ryan and two great grandchildren. Also preceding her in death are her siblings, Margaret Shaw, Mary Rakestraw, Robert Shaw, James Shaw, John Shaw and Joseph Shaw. Thelma graduated from Canton High School and later after her marriage was a homemaker and enjoyed working in her yard, knitting, reading and visiting her neighbors. She greatly enjoyed spending time with her children and grandchildren. She was a warm and caring mother and grandmother and had a good sense of humor and a great deal of patience. Cremation rites have been accorded by Oaks-Hines Funeral Home and Crematory in Canton per her wishes. A graveside burial of the ashes will be held on Saturday, March 14, 2020, at St Joseph Cemetery in Canton at 1 p.m. There will be no visitation. Memorials may be made to St Jude’s Children’s Hospital. To leave online condolences, please visit www.oakshinesfuneralhome.com