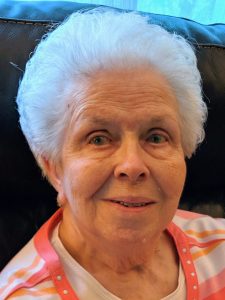 Patty JoAnn Hine, 93, of Havana passed away on Monday, February 17 at 7:35 p.m. at Sunny Acres Nursing Home in Petersburg. She was born on August 31, 1926 in Frankfort, Indiana to George and Sarah (Venard) Utterback. She married Ralph J. Hine on December 17, 1948 in Lebanon, Indiana. He preceded her in death on February 8, 2019. Mrs. Hine is survived by her four sons: Michael (Linda) Hine of Havana, Dan (Julie) Hine of Collinsville, Patrick (Karen) Hine of Lake Placid, Florida, and Chris (Rhonda) Hine of Havana, nine grandchildren, seventeen great-grandchildren, and two great-great grandchildren. She was preceded in death by her parents, four brothers, and five sisters. Mrs. Hine was a member of the Havana Church of Christ. She owned and operated Hine Jewelers in Havana from 1956 until 1985 with her husband. She was a volunteer at the Lincoln Christian Nursing Home Auxiliary and the Havana Food Pantry for many years. Graveside services will be held on Friday, February 21 at 11 a.m. at Laurel Hill Cemetery in Havana. Pastor Bill Boyce will officiate. Memorial contributions may be made in Patty’s name to St. Jude Children’s Research Hospital, Mason District Hospital, or Riverview Estates. Online condolences can be left for the family at www.hurleyfh.com. Hurley Funeral Home in Havana is in charge of arrangements.