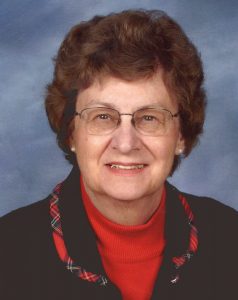 Anna Lee Bouslog, 85, of Urbana passed away peacefully, surrounded by her family at 6:01 p.m., Friday, December 27, 2019 at Meadowbrook Health Center, Urbana. Funeral services will be held at 10:30 a.m. on Saturday, January 4, at First United Methodist Church of Urbana. Rev. Robert Freeman will officiate. Burial will take place at Woodlawn Cemetery, Urbana. A visitation will be held prior to the funeral from 9 to 10:30 a.m. at the church. Anna Lee was born in Pekin, on February 20, 1934 to parents Leo and Jane (Williamson) Morris. They preceded her in death. Also preceding her in death were three brothers and two sisters. On July 11, 1959 Anna Lee married W. Allen Bouslog in Havana, he passed away on July 1, 1984. She is survived by her children: Annette (Rick) Ackerman of Urbana, Maurice (Melinda) Bouslog of Tolono, Patrick (Trish) Bouslog of Deerfield, Camille (Roger) Miller of Urbana; grandchildren: Heather (Michael) Reginelli, Vaughn (finance, Morgan Painter) Duitsman, Brent Bouslog, Craig Bouslog, Nathan Miller, Ryan Miller, Talan Miller and two great grandchildren: Vivian and Vera Reginelli. Her sister, Betty Jane Hall of Kissimmee, FL and her sisters-in-law; Shirley Morris of Marquette Heights and Joyce Bouslog of Chrisman also survive, along with many nieces and nephews. Anna Lee was raised on a farm near Topeka, and graduated from Foreman High School. Her first job was with the Tazewell County Farm Bureau where she met Allen Bouslog. She also worked for Caterpillar. They moved to Dixon in 1962 and later to Urbana in 1969, which became their home. After raising her children, she went back to work at Prospect Foods. She was active in the First United Methodist Church in Urbana where Anna Lee was a member of the Fellowship Sunday School class and United Methodist Women. She was involved with Thomas Paine PTA for many years. Anna Lee was also an enthusiastic fan and supporter of the Fighting Illini and held season basketball tickets for many years. Nothing was more important and dear to her heart than family. One of seven children, the importance of family and family values were instilled upon Anna Lee at an early age. Her devotion to her children and grandchildren was very clear. Her home was always filled with love for family. She was a happy babysitter, gameplayer and baker. Those will be special memories her children and grandchildren will never forget. The family would like to thank the staff of Meadowbrook and Harbor Light for the loving care they gave our mother. Memorial contributions may be made in Anna Lee’s honor to First United Methodist Church of Urbana. Condolences may be offered at renner-wikoffchapel.com.