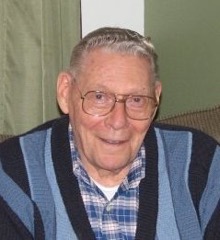 Richard “Dean” Gregory, 89, of Metamora, formerly of Havana, passed away on Wednesday, September 25, 2019 at 3:27 a.m. at Snyder Village Health Center in Metamora. He was born on October 16, 1929 in Peoria Heights to Paul and Lora (Day) Gregory. He married Joan Turner on June 6, 1953 in Havana, who preceded him in death on November 20, 2003 after 50 years of marriage. Dean is survived by five children: Lori (Brad) Marler of Metamora, David Gregory of Mason City, Scott (Kim) Gregory of Pontiac, Paul (Dawn) Gregory of Rockford and Steve (Nanci) Gregory of Tampa, Florida, 8 grandchildren, 11 great grandchildren, and nephew Terry Shilling of Peoria. He was preceded in death by his brother, Jack Gregory and sister, Carol Shilling. Dean was a graduate of Havana High School, a Korean War Veteran serving in the Navy, and a member of the Methodist Church. He was known as Mr. Fix It, an avid Chicago Cubs and racecar fan, and most importantly an extremely devoted husband, father and grandfather. Cremation rites have been accorded and a burial of ashes will be held at Laurel Hill Cemetery in Havana on Tuesday, October 1 at 11 am with Rev. Jame Hahs officiating. Memorial contributions may be to Snyder Village in Metamora. Online condolences can be left for the family at www.hurleyfh.com. Hurley Funeral Home in Havana is in charge of arrangements.