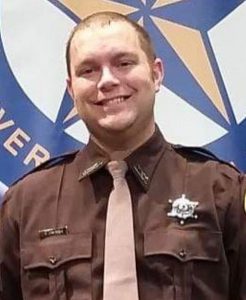 Deputy Troy P. Chisum, 39, of Canton was killed in the line of duty while serving the citizens of Fulton County Tuesday June 25, 2019 on Troy Rd in rural Avon. He was born August 10, 1979 in Phoenix, AZ; the son of Phil and Debra (Hebb) Chisum. He married the love of his life Amanda Stoddard on April 17, 1999 in Canton. She survives along with his father, Phil Chisum of Apache Junction, AZ; his mother and step father, Debra (Mike) Wheeler of Canton, mother and father-in-law, Walt (Kathy) Thomas of Cuba, three daughters, the lights of his life, Kyleigh (Andy DeLost) Chisum of Canton, Abigail Chisum and Gracie Chisum both of Canton, one sister, Krysta Dilts of Canton, step brother, Zach Wheeler of Canton, step sister Cher’ (Matt) Valdez of Phoenix, AZ; maternal grandparents, Lyle and Betty Hebb of Canton, and several nieces and nephews. He was preceded in death by his paternal grandparents and sister-in-law Jessica Lasswell. Troy loved his community and was a Deputy with the Fulton County Sheriff’s office. He also worked as a paramedic with Fulton County EMA and a firefighter with Northern Tazewell County. Troy was a member of the West Central Special Response Team and the ILEAS WMD/SRT team, Region 6. He had formerly worked for Lewistown Police Department. Troy enjoyed watching the Minnesota Vikings play, going to the shooting range, playing on the alumni football team and any activities that involve his wife and girls. Troy was always his daughters’ number 1 fan and loved watching Abby and Gracie work their magic on the softball field and be a guidance to Kyleigh as she pursues her medical career. Troy always helped and inspired his daughters to always follow their dreams. His girls have always said he was put on this earth to be a dad. Deputy Chisum dedicated his life to the service of his community. His legacy and sacrifice will forever be remembered. Funeral services will be held at 11 a.m. Monday at the Cuba High School with Pastor Corby Skiles officiating. Visitation will be held Sunday from 2 until 8 p.m. also at the Cuba High School. Cremation will be accorded following the services. Henry-Lange Memorial Home in Lewistown is assisting the family with arrangements. In lieu of flowers memorial contributions may be made to Deputy Troy Chisum Memorial Fund c/o MidAmerica National Bank of Canton or Deputy Troy Chisum Memorial Fund go fund me account. https:// www.gofundme.com/deputy-troy-chisum-memorial-fund Friday night at the Canton Varsity Softball diamond please join the family at 7 p.m. as his youngest daughter and her team play a game in his honor. To view Troy’s life tribute video or to send online condolences visit henrylange.com.