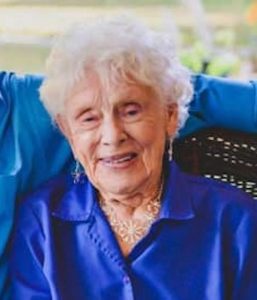 Helena “Lee” Emilie Schafer, 96, of Havana, passed away at her home at 5:54 a.m. on Tuesday, May 7, 2019. She was born March 16, 1923, in Hawkeye, Iowa, to Gustave and Ella (Ungerer) Begalske. She married Raymond Schafer on August 24, 1945. He preceded her in death on April 8, 2013. Mrs. Schafer is survived by two grandsons: Ronald (Clarissa) Campbell of Havana and Timothy (Tammy) Campbell, of Farmington, Arkansas; two grandchildren; sister, Barb (Larry) Daniels of West Union, Iowa and brother, Gene Begalske of Wisconsin. She was preceded in death by her parents, husband, one daughter, Judy Campbell and two brothers, Paul and Walter “Gus” Begalske. Mrs. Schafer attended church at the Havana Church of Christ with her family. She graduated from Alpha High School and later Wartburg College in Waverly, Iowa. She served in the US Navy in Washington D.C. She taught P.E. at Fairfield (Parsans College) then History in Granite City, IA High School. She was a member of the Havana Women’s Club, PEO and was an avid Bridge player. She also volunteered at the Havana Food Pantry. Visitation will be held at Hurley Funeral Home in Havana on Friday, May 10 from 5 until 7 p.m. Funeral services will be held at 1 p.m. on Saturday, May 11, also at the funeral home. Rev. Bill Boyce will officiate. Burial will follow the services at Laurel Hill Cemetery in Havana.