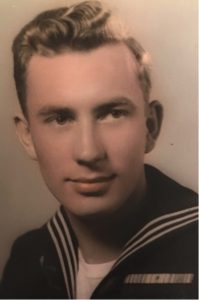 Dale Leland Burrows passed away April 7th 2019. He was born in Alton on June 11, 1926 to Gladys and Clarence Burrows. Dale was preceded in death by his sister Dess McKinney. Dale is survived by his beloved wife, Marianne, daughters Elizabeth (Libby), Amy (Barrett), and sons Bradley and Jeffrey. He is a grandfather to 6 grandchildren and 3 great-grandchildren. Dale served in the United States Navy during World War II in the Pacific on Okinawa, Japan. Additionally, he was a union brick mason for over 35 years and eventually retired as a fireman for the Havana Illinois Fire Protection District following a 15 year career. He graduated in 1946 from Havana Community High School in Havana. Dale was an aviation enthusiast, licensed pilot and a member of the Experimental Aircraft Association. He enjoyed spending time camping with his family on vacation road trips across America. He will be fondly remembered and dearly missed by his family and friends. Dale and his wife were residing in Hudson, Florida after living in Havana for most of their lives. Services will be held at a later date.