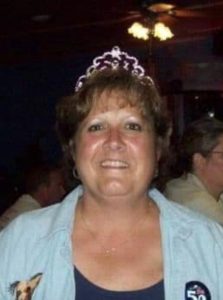 Theresa M. Snyder, age 57, passed away on Wednesday, April 3, 2019 at her home in Mason City. She was born to Henry Boyle and Nancy Vespa on September 15, 1961 in Denver, CO. She married Brad G. Snyder on December 22, 1989 next to the pool at the Holiday Inn in Springfield at Christmas time, and it was all she could have ever wanted. Theresa is survived by her husband Brad of Mason City; children, Rachel (Micheal) Mulford, Amy (Andy) Zieglowsky, Anthony (Holly) Snyder, and Nicholas Snyder, all of Mason City; eight grandchildren; mother, Nancy Daniels of Mason City; sister, Patricia Jones of WV; and niece, Diana Dulaney of Rochester. She was preceded in death by her father. Theresa had many hobbies including fishing, boating, golfing, playing softball, getting her nails done, riding and showing horses, and spending time with her family and dogs. She was the co-owner of The Hideout in Mason City, and was a member of the Havana Boat Club, AMVETS, IRBBA, and Delta Water Fowl. Theresa donated to animal shelters and spent her spare time going out of her way to stay in touch with almost everyone she’s ever known. Theresa retired from the United States Air Force as a Senior Master Sergeant and retired from 183rd Fighter Wing in Springfield after 30 years as the Accounting Finance Superintendent. Cremation rites have been accorded and a Celebration of Life for Theresa will be held at a later date. Hurley Funeral Home in Mason City is assisting the family with arrangements. Memorial donations can be left in Theresa’s name to the American Cancer Society. Theresa’s online memorial website may be viewed and condolences may be left at www.hurleyfh.com.