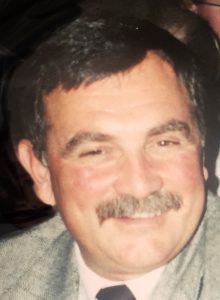 Sidney “Sid” L. VanEtten, 67, of Petersburg, passed away on January 6, 2019. He was born on August 23, 1951, in Springfield to Glen and Nancy (Lee) VanEtten. He married Christine Hovey on June 8, 1974 in Easton. Sid was a member of the Petersburg United Methodist Church, Bucket Club, Farm Bureau, Biggs Elevator Board, former FBFM Board, Mason County Fair Board and a former member of the Easton School Board. He was a lifelong farmer who enjoyed spending time with his grandchildren. Sid also, along with his children, had a passion for the show cattle industry with the highlight being the 2002 Illinois State Fair Grand Champion Steer. Sid is survived by his wife and three children; Mark (Ashlee) VanEtten of Kilbourne, and Tara (Troy) Mayhew of New Windsor, and Scott VanEtten of Morton. He is also survived by four grandchildren; Chandler VanEtten, Carter VanEtten, Stella VanEtten, and Sidney VanEtten, as well as his mother Nancy VanEtten, a brother and two sisters; Dale (Pat) VanEtten of Petersburg, Pam (Brad) Armbrust of Easton, and Heidi Scaggs of Petersburg. He is also survived by many nieces and nephews. Sid was preceded in death by his father and a brother in law, Rick Skaggs. A memorial gathering will be held on Wednesday, January 9 from 4 p.m. to 8 p.m. at the Petersburg United Methodist Church. A memorial service will be held on Thursday, January 10 at 11 a.m. at the church with Rev. Rick Pierce and Pastor Al Sample officiating. Memorials in Sid’s name may be made to his grandchildren or the Kilbourne Fire Department. Please visit Sid’s online obituary at hurleyfh.com to leave condolences to the family and share a memory.