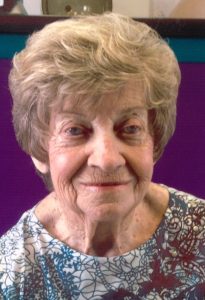 Donna June Amsler, 88, of Cuba, passed away peacefully surrounded by her loving family at 4:24 p.m. on Wednesday, November 28, 2018 at Graham Hospital in Canton. Donna was born in Canton to Roy and Ethel (Stevenson) Rock on June 10, 1930 and grew up in Cuba. After graduating from Cuba High School, she worked various jobs and would occasionally bring up the fact that she made good tips as a waitress. Family would point out that she was a natural for that job with her great looks and outgoing personality! After being swept off her feet by a dashing Navy veteran who loved to ride Harley’s, she married William “Bill” C. Amsler in Cuba, on February 13, 1949. Bill preceded her in death on October 12, 2006. Donna was a very loving wife, mother, grandmother, and great-grandmother. She loved to shop, sing, dance, and have a good time. She excelled at roller skating and when Bill was courting her, he tried to impress her by saying that, he too, was a great skater. She would laugh and say, “but he really wasn’t any good! Her favorite food was “fried chicken”. She was the only one in the family that would go to a great steakhouse and order chicken! Donna was a lifetime member of the Cuba United Methodist Church. Donna is survived by her four children, Diana (David) Darr of Cuba, Linda (Mike) Mitchell of Cuba, Kathleen McLouth of Cuba, and Bill (Cheryl) Amsler of Rossville, IN; eleven grandchildren; eighteen great-grandchildren; and a twin brother, Ronald Rock of Clarkson, KY. She was also preceded in death by her parents. There will be a private graveside service for the family on Thursday, December 6, 2018 at the Cuba Cemetery in Cuba. Rev. Lee Amsler will officiate. A celebration of life and loving tribute to Donna will be held at a future date for friends and family. Cremation rites will be accorded through Sedgwick Funeral Homes & Crematory in Canton, IL. Memorials can be made to the Cuba Senior Center. To make online condolences you may go to www.sedgwickfuneralhomes.com