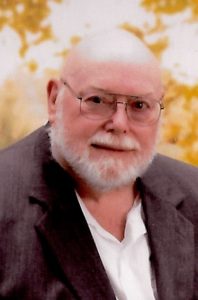 Jerry Curtis Ash, 75 of Havana, passed away at 10:32 p.m. on Wednesday August 1, 2018 at Carle Hospital in Champaign. He was born December 14, 1942 in Bloomington, the son of Orlan and Marie Hughes Ash. He married Juanita Tarvin on March 16, 1966 in Havana. She survives. Jerry worked for 35 years working in maintenance in the foundry industry. He spent four years in the U.S. Navy, serving in the Vietnam War. He was a member of the Church of Christ in Havana. He was a model train fanatic, and loved ancestry, cemetery hopping, fishing, camping, and travel. In addition to his wife, he is survived by a son, Jason Ash of Peoria; a daughter, Tammy (Rick) Whitby of Dandridge, Tennessee; a sister, Barbara (Dale) Harris of Havana; a brother, Dennis Ash; and several nieces and nephews. In addition to his parents, he is preceded in death by a sister, two half sisters, and four half brothers. Services will be held at 11 a.m. Tuesday at the Church of Christ in Havana. Visitation will be held one hour prior to services at the church. Following services, cremation rites will be accorded. Memorial contributions may be made to the American Heart Association. Condolences may be shared with the family at eastlawn-bloomington.com.