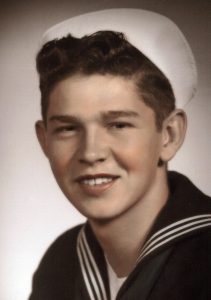 James “Jim” L. Owens, 84, of Canton, passed away on Wednesday, April 11, 2018, at OSF St Francis Medical Center in Peoria. He was born on December 19, 1933 in Cuba, to George and Ethel May (Hageman) Owens. They preceded him in death. He married Ila Jean Yocum on October 23, 1955 at her parents’ home near Marietta, Illinois. She preceded him in death on December 4, 2017. Surviving are four children, Michael Owens (Nguyen Hai Anh) of Frankfurt, Germany, Rebecca Billiter (Kirk) of Bloomington, Kirk Owens of Champaign, and Gina (Greg) Spahn of Canton; 8 grandchildren Ketra Moore, Colton Hinderliter, Kiefer Owens, Ruthie Mathewson, Elizabeth Spahn, Olivia Spahn, Owen Spahn, and Michael Vinh Nguyen Owens; and six greatgrandchildren. Also preceding him in death are four brothers, Glenn Owens, Charles Owens, Gerald Owen and Richard “Dick” Owens; and four sisters, Mildred Parkinson, Leona Krider, Vivian Conley, and LaVeta Williams. Jim served in the U.S. Navy from 1951 to 1954 during the Korean War and was attached to the antisubmarine squadron VS 22. From 1955 to 1956 he worked for International Harvester in Canton. He studied at Western Illinois University from 55 to 1957. He then became a trooper for the Illinois State Police District #8 from 1957 to 1976 achieving the rank of Master Sargent. He then served from 1976 to 1987 in District #14 with part of his career being on the tactical response team. He retired in 1987 after 30 years of service. After his retirement he taught at Spoon River College. During his career and in retirement, he focused on gun safety and teaching hunter’s safety courses. Most of all Jim was a dedicated husband, father, and grandfather; and he spent his life loving and protecting his family and community with passion. He was a past member of the Illinois Police Association, current member of the Fraternal Order of Police Lodge #41, Retired State Police Association, Cuba American Legion, Pheasants Forever Spoon River Chapter and Trinity Lutheran Church. A memorial visitation will be held on Sunday, April 22, 2018, from 1 p.m. until 3 p.m., at Oaks-Hines Funeral Home in Canton with a funeral service to follow visitation at 3 p.m. Pastor Micah Garnett will officiate. Cremation rites have been accorded per his wishes. Burial of the ashes will follow at Marietta Cemetery. In lieu of flowers, memorials can be made Trinity Lutheran Church in Canton or St. Jude’s Children’s Hospital. The family would like to thank Red Oak Estates for all of their care for Jim. To view Jim’s tribute video or to leave online condolences please visit www.oakshinesfuneralhome.com.