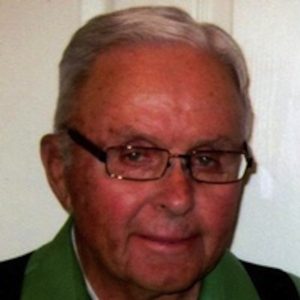 Jonathan Fritz Schwarz, 88, went to be with His Lord on Sunday, March 4, 2018. He was the second oldest of 6 children, born on December 12, 1929 in Sutton, Nebraska to Fritz and Clara (Griess) Schwarz. The family moved to Loveland, Colorado in 1945, and he graduated from Loveland High School in 1947. In 1951 he was drafted into the United States Army and served in Korea. He was honorably discharged when his father suffered a farming accident. On March 15, 1953, Jonathan was united in marriage to Mary Dell Young in Loveland. He was a farmer and also worked in the winter as a supervisor at the Great Western Sugar Factory until 1960. Jonathan continued farming until he semi-retired in 1995, selling his farming operation to his two sons, but continuing to work with them. Farming truly was his passion. He raised corn, wheat, and barley for Coors. Jonathan received the Coors Grower of the Year award in 1981. He was always interested in what was happening on the farm, even when he had to move to North Shore Health Care Facility in December of 2016. Jonathan was a charter member of Loveland Protestant Reformed Church, serving as a deacon for 15 years and faithfully attending worship services and Bible study. He enjoyed listening to old gospel music, especially quartets. His favorite team was the Colorado Rockies, and he rarely missed watching them play. He is survived by Mary, his loving wife of nearly 65 years; daughter Joanna Straayer and husband Tom Vatrano; sons Marvin Schwarz and wife Esther, and Ray Schwarz and wife Joy all of Loveland; 9 grandchildren, and 10 great grandchildren. He is also survived by sisters Talitha Dotson, Virginia Moore and husband Max, brother Don Schwarz and wife Lynnette, all of Loveland, as well as numerous cousins, nieces, nephews and friends. He was preceded in death by sisters Leota Weitzel and Viola Campbell and son-in-law Marty Straayer. The funeral service was held on Thursday, March 8 at 10:30 a.m. at Loveland Protestant Reformed Church, with viewing at 10:00 a.m., Rev. Steven Key officiated. A graveside service followed at Loveland Burial Park. Memorial contributions may be made to Loveland Protestant Reformed Church in care of Kibbey-Fishburn Funeral Home, 1102 North Lincoln Ave., Loveland, Colorado.