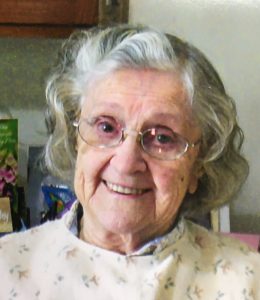 Phoebe Katherine Fox, 95, of Havana, passed away at Mason District Hospital in Havana at 8:25 p.m. on Saturday, February 24, 2018. Phoebe was born on May 20, 1922 in Litchfield to Edward Holmes and Lydia Katherine (Williams) Crisfield. She married Ernest “Bud” Clayton Fox on January 12, 1939 in Bowling Green, MO. He preceded her in death on September 29, 2012. Also preceding her in death was her brother, Edward, and two half-brothers and two half-sisters. Surviving are two sons, Jim Fox of Havana and Ernest “Jack” (Laura) Fox of Springfield, Illinois and two daughters, Patricia (Robert) Williams of Oklahoma City, Oklahoma and Phyllis (Roger) Grover of Havana. Also surviving are four grandchildren, Diana (Paul) Downing, Dean (Angie) Fox, Sherry Williams, and Chad Williams, and three great-grandchildren. Phoebe worked in factories in Havana at an early age and did house cleaning in several homes for many years. She was a seamstress her entire life and did sewing for others. She was a member of the Havana Church of the Nazarene. Visitation will be held at the Havana Church of the Nazarene from 5 p.m. to 8 p.m. on Tuesday, February 27, 2018. Funeral services will be held at the church at 11 a.m., with an hour visitation prior to the service. Burial will follow the services at Laurel Hill Cemetery east of Havana. Rev. Jim Buchanan and Rev. Sue Roat will officiate. Memorial contributions may be made to Mason District Hospital or Havana Church of the Nazarene. Online condolences can be left for the family at www.hurleyfh.com. Hurley Funeral Home in Havana is in charge of arrangements.