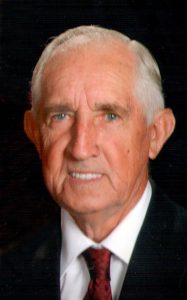 James “Jim” Leroy Eeten, 80, of San Jose passed away on Monday, February 5, 2018 at 7 a.m. from this life into Eternal Life with his wife of 56 years and his two children at his side. He was born on October 15, 1937 in Delavan Township to Fred J. and Edna Hellman Eeten. Jim was baptized on February 27, 1938 and was received into full membership at the Salem Methodist Church, San Jose on March 25, 1951. He married Marlene Bierwirth of Bartonville on November 11, 1961 at the Church of the Brethren in Peoria. She survives. Also surviving are one son, Rodney Eeten of St. Peters, MO; one daughter, Rosemary (Brent) Behrends of San Jose; two granddaughters, Sarah Behrends of Lincoln, and Mariah Behrends of San Jose; five brothers, Stan (JoAnn) Eeten of Delavan, Floyd (Evelyn) Eeten of Pekin, Gary (Sharon) Eeten of Mapleton, Pete (Della) Eeten of Pekin, and Ron (Deb) Eeten of Eureka; four sisters-in-law, Joanne Davis of Bartonville, Janice Bierwirth of Peoria, Linda Bierwirth of Glasford, and Judy Bierwirth of Morris; and many nieces and nephews. He was preceded in death by his parents and four brothers-in-law, Dale Davis, Roger Bierwirth, Larry Bierwirth, and Gary Bierwirth. Jim was a 1955 graduate of San Jose High School. Jim farmed his entire life in the San Jose and Delavan area and it wasn’t a just a job for him as he loved farming so much that he never retired. He served in the Delavan National Guard for six years (1960-1966). Jim served his community in many ways. He was a faithful member of the San Jose United Methodist Church serving on the Board of Trustees. He served as trustee for Green Hill Cemetery and served as President of the trustees for the San Jose Fire Protection District. He was a member of the San Jose Tri County Antique Tractor Club and had a passion for pulling his Oliver 88. He was a past member of the Hartsburg/Emden Rod and Gun Club and San Jose Tri County Twirlers. He was a past member of the San Jose town board. He was a loving husband, father and grandfather that loved spending time with his family and enjoyed hunting, fishing, drag racing and watching NASCAR. He will be remembered for his servant heart with a strong commitment to his family, church and community. His funeral will be at 11 a.m. Saturday, February 10 at United Methodist Church in San Jose. Pastor Charles McDonald will officiate. Visitation will be from 5 to 7 p.m. Friday at the church fellowship hall. Burial will be in Green Hill Cemetery in San Jose with military honors. Davis-Oswald Funeral Home in Delavan is handling the arrangements. Memorials may be made to San Jose United Methodist Church or San Jose Fire and Rescue. To express condolences online, visit www.davisoswaldfh.com.