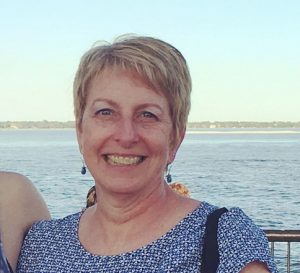 Lynda Stewart Trimpe of Clinton, SC passed away on January 20, 2018 at Greenville Memorial Hospital with family by her side. She was 60 years old. Lynda was born on August 8, 1957 in Clinton, IN to her parents, Glenn Eldon Stewart and Harriet Paula (Reaney) Stewart. She graduated from Illinois College with a B.S. in Accounting in 1979, and married Robert “Bob” William Trimpe on June 10, 1979. The couple have four daughters, Megan, Sarah, Alyssa and Mary, and settled in Bloomington in 1997. She started work for Minier Cooperative Grain Company in Minier as their grain accountant in 1997, and after a five-year stint with Tate & Lyle in Decatur, returned to work for Minier Coop (later Grainland Cooperative) as their controller until 2015. Both Lynda and Bob then started work for FS Grain in Morris in 2015. She had recently relocated to Clinton, SC after retiring from FS Grain in Dec. of 2017 to spend time with her daughters and granddaughter. Lynda was a compassionate and patient mother, and loving and supportive wife. She was an avid reader, a love which she passed on to her daughters, and an expert level cross stitcher who gifted pieces to friends and family throughout her life. She and Bob followed all four daughters’ club volleyball and collegiate volleyball teams, attending tournaments and matches across the country. Lynda and Bob built a strong and healthy marriage that served as an example of a true partnership between best friends to everyone who knew them. She loved her family, shared her sense of humor and ability to not take herself too seriously, and empowered her daughters to be independent and spirited women. She is survived by her husband Bob Trimpe; daughters Megan Trimpe Whitaker and husband Simon of Clinton, SC, Sarah Lynn Trimpe and fiancé Ryan Real of Easley, SC, Alyssa Marie Trimpe of Topeka, and Mary Elizabeth Trimpe and fiancé Chad White of Charleston, SC; mother Paula Reaney Stewart; brother Paul Stewart and his wife Carolyn, sister Susan Gaines and her husband Jeff; and granddaughter Clair Whitaker. She is preceded in death by her father, Glenn Eldon Stewart. A visitation will be held from 10 a.m. to 11 a.m. on Thursday, January 25 at Gray Funeral Home in Clinton, SC. A funeral service will be held at 11 a.m. at Gray Funeral Home, followed by burial at Pinelawn Memory Gardens in Clinton, SC. Memorials and donations may be given to the American Heart Association’s Go Red for Women campaign. Condolences may be expressed to the family at www.grayfuneralhome.com.