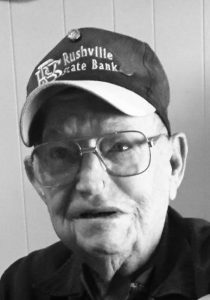 Dwayne E. Workman, 85, of Astoria passed away at OSF St. Francis Medical Center in Peoria at 12:09 a.m. on Sunday, December 24, 2017. He was born on June 22, 1932 in Woodland Township, Fulton County to Everett and Pearl (Smith) Workman. Dwayne married Josephine (Hayes) Workman on July 28, 1956 in Hannibal, MO. She preceded him in death on September 1, 2001. Also surviving are three daughters, Connie Robertson and Janet (Danny) Haywood, both of Rushville, and Carol Cozad of Lewistown. Four grandchildren also survive: Amanda Workman, Olivia Robertson, Chriz Cozad, and Melissa Cozad; and four great-grandchildren: Brooklyn, Cooper, Marlee, and Everett. His brother, Phillip Workman of Astoria, survives as well. He was preceded in death by his son, Gary Dwayne Workman, and his sister, Rose Marie Workman. Dwayne worked at Caterpiller Tractor Company for 32 years, and was also a U.S. Army veteran. Visitation will be on Wednesday, December 27 from 4 to 7 p.m. at Shawgo Memorial Home in Astoria. Services will be held on Thursday, December 18 at 11 a.m., with Pastor Jason Triplett officiating. Burial will follow at Summum Cemetery in Summum, with military rites provided by the Astoria American Legion Post #25. Memorials may be made to the Astoria Fire and Rescue Squad. Online condolences may be given to the family at www.shawgomemorialhome.org.