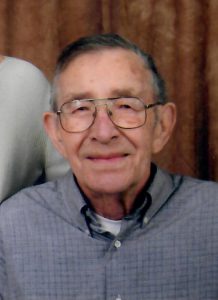 Thomas Franklin Sanders Jr., 82, of Springfield, formerly of Mason City, passed away on November 6, 2017 at his home. He was born on January 24, 1935 in Lincoln, the son of Thomas Franklin and Ruby Marie Sanders. He married Glenna Steveson in 1956. She preceded him in death in 1988. Tom then married Jean Baker in 1992 and moved to Springfield, where he resided until his passing. Jean survives him. Tom is survived by two daughters, Tina Fisher of Wasilla, AK, Leann Parker of Wilmington, NC, one son, Timothy Sanders of Mason City, two sisters, Edyth Lockenour, and Marilyn Francis both of Mason City, three stepsons, Tim Black of Cleveland, OH, Greg Black of Auburn, and Todd Black of Springfield. Tom is also survived by his grandchildren, Cody Fisher- White, Wendy Maupin, Jay Sanders, Kimberly Minder, Mindy Frohn, Brandy Powell, Molly Sanders, Emma and Erin Sanders, Shannon Park, Samantha Parker, Phillip Parker Jr., and Levi Barnes. He had eighteen great grandchildren, three step grandchildren, and six step great grandchildren. Tom was preceded in death by his parents, one daughter, Debbie Barnes, and one sister, Ruth Miller. Tom went to a country school until he was in fourth grade. His family then moved to a farm is Mason County where he attended school until the family moved to a farm near San Jose. He finished out his school years there. After Tom’s marriage to Glenna in 1956 they moved to San Diego, CA, where he worked for ConAir Aircraft. After one year they moved back to Mason City. Tom taught himself to be a plumber, air conditioner/heating expert. After passing his tests and receiving his plumbing license, he started his own business. During the Depression in the 80’s, he and his family moved to Vail, CO, where he did plumbing work until the economy improved. He and his family returned to Mason City where he continued his business. He owned and operated his plumbing business for over 20 years before retiring. Tom loved building and doing jobs with his hands. Besides his plumbing business, he built two houses and three apartment complexes in Mason City. During Tom’s marriage to Jean, he renovated a house, and built a sunroom that was then turned into a bed and breakfast that they would operate together for ten years. Everyone that knew Tom would describe him as the most honest person they knew. He was also the kindest, gentlest, and sincerest person. A graveside service will be held for Tom on Saturday, November 11 at 11 a.m. at Mason City Cemetery in Mason City. Rick Kehl will officiate. A luncheon will follow the services. Memorials may be made to the Mason City to Peoria St. Jude Run. Online condolences may be left for the family at www.hurleyfh.com Hurley Funeral Home is assisting the family with arrangements.