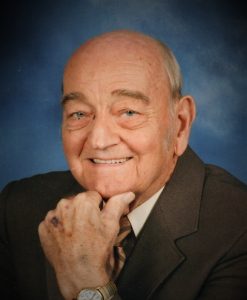 Robert K. Sinnock, age 85 of Havana and formerly of Beardstown, died Friday, October 13, 2017 at Mason District Hospital in Havana. He was born November 11, 1931 in Beardstown, the son of Milton W. and Virginia Koch Sinnock. He married Elizabeth “Betty” Wherley on August 24, 1952. Surviving are his wife of 65 years, Betty Sinnock of Havana; four daughters Mary Anne (husband Rick) Wilson of Omaha, NE, Nancy (husband David) Jacob of Davenport, IA, Barb (husband Jason) Jackson of Beardstown, and Connie (husband Mark) Shugart of Chatham; 13 grandchildren Elizabeth (husband Kubi) Dinc, Bobby Black, Jack Robert (wife Amber) Hamilton, Maria (husband Ben) Wallace, Josh (wife Christine) Shugart, Andrew Hamilton, Molly (husband Matt) Dewell, James (wife Cassie) Hamilton, Angela Epping, Sarah Jacob, McQuade Jackson, Rachel Jacob, and Haley Jackson; 14 great grandchildren Dylan Becker, Gavin Epping, Joseph Dinc, Braylon Epping, Kadyn Hamilton, Sarah Hamilton, Melissa Dinc, Ava Hamilton, Nora Hamilton, Wyatt Shugart, Isaac Shugart, Jaxyn Hamilton, Addy Dewell, and Quinn Dewell; and several nieces and nephews. He was preceded in death by his parents, and four siblings Ginny Cobb, Donald Sinnock, Greg Sinnock, and Pat Daniel. Robert graduated from Beardstown High School in the class of 1950 and then served four years in the United States Navy as an Aviation Machinist Mate. He was stationed in Florida and began receiving letters from Betty Wherley; whom he had met a couple of years prior during “March Madness” at a Beardstown and Rushville rivalry finals basketball game. Bob came back to Beardstown on leave in March of 1952, and asked Betty to marry him. After leaving the service, the newlyweds came back to Beardstown where he worked at Critic Mills, Bohn Aluminum, and then Oscar Mayer, where he retired in 1987 after twenty years as a meat cutter. Robert was a former member of the Beardstown JayCees’s and the Beardstown Elks Lodge #1007. He was also a member of the First United Methodist Church in Beardstown, and after moving to Havana in 1987, he transferred his membership to First United Methodist Church in Havana. He shared his love for fishing with each of his children, grandchildren and great-grandchildren. He also took much pride in his garden and was known for his sweet corn. Bowling, woodworking, playing scratch-offs/slot machines, and singing silly songs are just a few things he enjoyed, but most of all he cherished his family. Burial will be held at 11 a.m. Friday, October 20, at Rushville City Cemetery. Following the burial, a celebration of life will be held at noon on Friday, at Colwell Memorial Home in Beardstown. The family will meet with friends from 5 to 7 p.m. Thursday at the memorial home. Memorials have been suggested to the Beardstown Park District for the Bob Sinnock Learing To Fish Program. Condolences may be left online at www.colwellmemorialhome.com or on Facebook at Colwell Memorial Home.