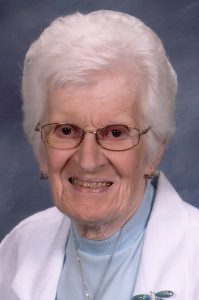 Anna Mae (Johnson) Dare, 90, of Canton, passed away at 2:43 p.m. on Monday, October 16, 2017 at Red Oak Estates in Canton, where she was a resident. She was born on the family farm on April 3, 1927 in Canton to Joseph M. and Mildred L. (Rohrer) Johnson. She married Harold J. Dare on April 11, 1948 in Canton. He preceded her in death on June 30, 2007. Also preceding her in death are her parents, one brother, George R. Johnson, and one sister, Lois Mechling. Surviving are two children, Henry J. (Cheryl) Dare of Canton, and Janice Bruster of Canton; three grandchildren, Greg (Samantha) Dare of Pekin, Phillip (Kris) Dare of Canton, and Mark Bruster of Peoria; two great-grandchildren, Isaac and Madison Dare; and two step-grandchildren, Elizabeth and Emma Hayes; and one brother, Joseph Allen Johnson of Wichita, KS. Anna Mae enjoyed raising two children and being a farmer’s wife. She was a member of Wesley United Methodist Church, and Wesley UMW in Canton, former member of Fulton County Farm Bureau, and Fulton County Couples Club. Services will be held at 10 a.m. on Saturday, October 21 at Wesley United Methodist Church in Canton where a visitation will be held from 9 to 10 a.m. Rev. K. Bruce Rushing will officiate. Burial will follow the services at White Chapel Memory Gardens in Canton. A visitation will be held from 6to 8 p.m. on Friday, October 20, 2017 at Sedgwick Funeral Homes and Crematory in Canton. Memorials can be made to Spoon River College Foundation. To view Anna Mae’s DVD or to make online condolences, please visit www.sedgwickfuneralhomes.com.