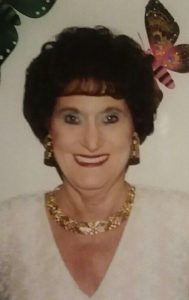 Rosalyn Jean “Nean” Bridges, 84, of Havana, passed away at Renaissance Care Center, in Canton, at 8:15 a.m. on Friday, September 29, 2017. She was born August 23, 1933 in Havana, in Mason County, Illinois, to Chester and Margaret (Smith) Burgett. She married Dale “Stub” Bridges on August 28, 1949. He preceded her in death on September 14, 2003. Mrs. Bridges is survived by one son, John Allen (Twana) Bridges of Augusta, Georgia; three grandchildren: Natasha (Joseph) Ruff of Georgia, Chet Bridges of Havana and Chris (Carrie) Bridges of Colorado; two great-grandchildren: Katrina and Bryan of Colorado. Also surviving are one sister, Mary (Robert) Fawcett and two brothers: Dallas “Bud” (Rose Mary) Burgett, Chester L. (Bessie) Burgett Jr. and daughter-in-law Brenda Bridges, as well as many nieces and nephews. She was preceded in death by her parents, husband and one son,Dale Dean Bridges, Jr. Mrs. Bridges and her husband were co-owners of Turkey Bowl in Havana for several years. She later worked for Weddle’s IGA for over 25 years. After moving to Florida, she taught at Port Charlotte Vo-Tec until her retirement at the age of 75. Funeral services will be held at Hurley Funeral Home in Havana at 1 p.m. on Tuesday, October 3, 2017, with visitation one hour prior to the services. Burial will follow the services at Laurel Hill Cemetery in Havana. Rev. Mike Hopps and Terry Hackman II will officiate. Following the graveside services, a funeral luncheon will be held at VFW Post #6408 in Havana. Nean’s family requests that all food be delivered directly to the VFW, prior to the luncheon. Memorial contributions may be made to American Arthritis Foundation. Online memorial messages may be left for the family at www.hurleyfh.com. Hurley Funeral Home in Havana is in charge of arrangements.